Showing influences from the Hispano-Moresque to the Indo-Saracenic, and used at The Turkish Baths The Bathhouse, Bishopsgate Churchyard, London (1895) and also at the Royal Pavilion in Brighton (1894) during refurbishment and extensions, including the Brighton Museum and Pubic Library. According to the Brighton Museums website...

The entrances were filled with tiling designed by George Elphick and executed by Craven Dunhill & Co. from 1894 onwards. Inside the porch were panels ‘recalling the Moorish design on the Alhambra in Spain’. The staircase and walls were lined with a geometric dado in greens and blues crowned by a rich frieze. The walls of the entrance hall were also decorated with cool green scale-pattern tiles. The screen in front of the staircase, again in the words of the Brighton Herald, ‘must represent the highest degree that faience work has reached in its application to the constructive parts of a building.’

VICTORIAN CRAVEN DUNNILL & CO TILE PANEL, designed by G.Harold Elphick, shaped topped, glazed and decorated in relief with a stylised pattern in tones of yellow, within a wooden frame, REG No 241168, 71cm high x 61cm width The pattern was originally taken directly from a decorative plaster motif in the Alhambra Palace in Granada Spain. This tile panel was removed from the Nevills New Turkish Bath, Old Broad Street, London. 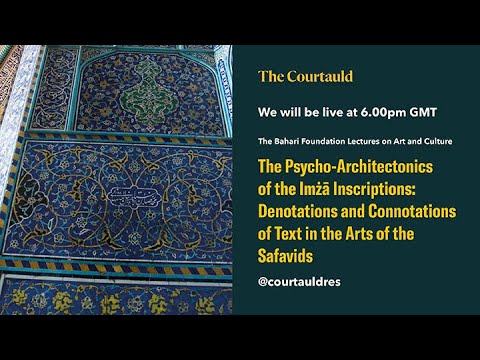 The Psycho-Architectonics of the Imżā Inscriptions: Denotations and Connotations of Text in the Arts

Three of a perfect pair

The Joy of Polychrome